What is Dermatitis Herpetiformis 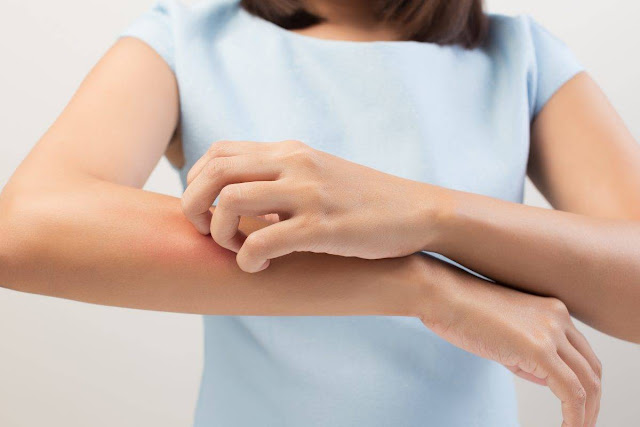 What is Dermatitis Herpetiformis?


DH is more common in men than women (3:2) and individuals from northern Europe, according to American Osteopathic College of Dermatology. DH is a rare and extremely itchy. The rash is most commonly found on the back, elbows, knees, head, and buttocks.


Symptoms and Signs of DH:

The rash consists of small red boils, bumps or lesions. Before the bumps or boils form, there is a burning sensation. The bumps can scab over and heal after a few weeks and new spots will likely reappear. The burning and itching can feel intense and intolerable at times.


It is theorized that certain genes make people susceptible to developing the disease. According to National Organization of Rare Disorders,  “approximately ninety percent of people with this disease are positive for HLA-B8 gene, a marker that may indicate a predisposition to this disease.”


DH is a lifelong condition that is caused by an intolerance to gluten. Gluten is a protein found in wheat, barley, and rye. DH is not a typical allergy, like hay fever or hives. DH is caused when consumed gluten causes the immune system to produce immunoglobulin A (IgA) antibodies in the lining of the intestines. IgA is produced to attack gluten, because the immune system has misidentified gluten to be a dangerous or toxic substance. The IgA antibodies attach to gluten, and together they enter the body through the intestinal lining and circulate the blood stream. Eventually, tehy clog up in the small blood vessels of the skin, causing another immune reaction. White blood cells come to the scene to help fight the gluten and release complements. Complements are a powerful chemical that causes the rash ofDH to form on the skin.  Iodine is required for a reaction to occur, therefore, those with DH should not come in contact iodine or consume iodized salt.


DH is diagnosed via direct immunofluorescence testing of skin tissue directly adjacent to a lesion or boil. A positive test will show the presence of the IgA antibody, which is not normally present on skin tissue.


For most, a strict gluten-free diet will partially or completely eliminate the rash. Often improvement from a gluten free diet can take weeks or months. Even tiny amounts of gluten can cause a reaction. Sometimes, the rash will come and go without explanation.


Dapsone is an antibiotic drug that is highly effective and can improve symptoms within 2-3 days. Unfortunately, it can have uncomfortable side effects. Therefore, the initial dosage is small and is gradually increased to ensure it is well tolerated by the body. Dapsone dosages will increase until the symptoms of DH are eliminated. Sulfapyridine and tetracycline are alternative drugs that are less effective, but can be used if an individual is intolerant of Dapsone.


Any personal views expressed on this blog are the writers’ own and do not necessarily reflect the views of Kay’s Naturals, Inc. It is recommended that you seek independent medical advice before making any decisions that can impact your health.